Berlin based Trummerschlunk is releasing his debut EP of experimental slow tech “Soupe Populaire” via Audiolith Records on 24 May 2017. Four tracks, ranging between 103 and 114 bpm, capture bits and patterns of synthesized analogue sound, swallow them up, and release pieces of technoid music that are unsettling and magnificently mesmerizing at the same time.

It’s as if modular synths are having a jam session at night when no one is looking, mixing in macro recordings produced by little robot dolls. As if you step into a mad scientist’s lab where everything fizzles, pops, and beeps, but somehow all of a sudden the elements come together in the rhythms and beautifully haunted melodies of a modern day Fantasia musical. Trummerschlunk’s jazz-session-of-the-machines-style is linked to his method: He plays fully improvised live-sets, then develops song ideas from the recordings afterwards. Consequently, his tracks are characterized by improvisation, handcrafted synths, and modularized sounds.

Based on a poem by Joseph Pearson, “Noah” brings in the voice of David Minor, enchanted and wonderfully lost, as if emanating from half-lit rooms behind doors left ajar. “After the Fall” is the most abstract piece on the EP with Saam Schlamminger’s signature percussions and string instruments that seem to circle one another – measuring space, punctuating time. The title track leans into minimal, interlaced with mechanical echoes and industrial noisiness. The final track is “Portico” feat. Lucia Cadotsch. Trummerschlunk has woven her voice into a nervous dreamscape, which impressed the jazz singer so much that she invited him to play at the release party of her “Speak Low” Renditions at Berghainkantine on 26 May 17. Not to be missed!

The EP will also be released on limited coloured vinyl. 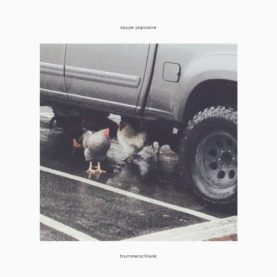